Cashless payments are more important than family and friends 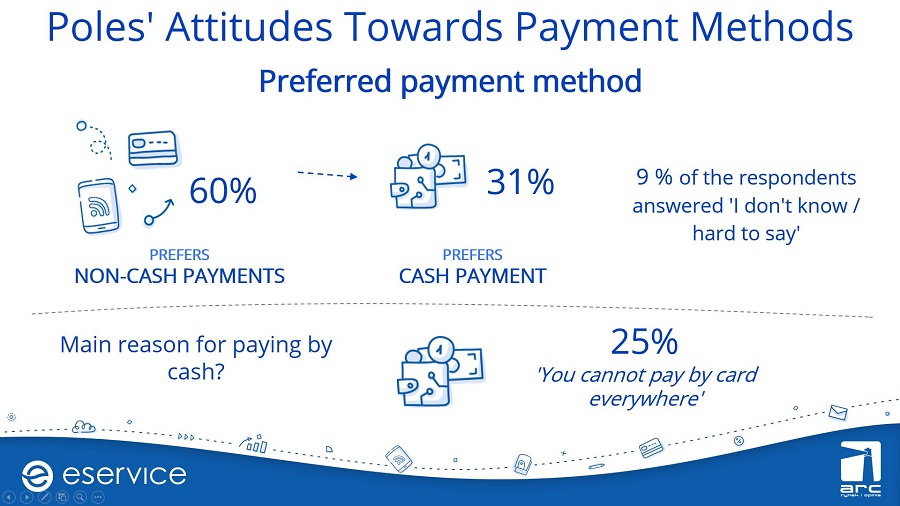 According to the latest study entitled 'Poles' attitudes towards payment methods,' the availability of card or mobile payment in nearby stores and service points is more important when choosing a place of residence than the distance from the place of residence of family and friends. As many as 60% of Poles indicate card or mobile payment as their preferred form of settlement. The perception of cashless payments is also changing. Poles are beginning to treat the availability of cashless payment as something as natural and obvious as Internet access or hot tap water.

This is the second wave of the study on Poles' preferences towards forms of payment and their relationship to money. Similarly to last year's study, the current one was conducted on a sample of 1000 Polish people, however, it also included people aged 55-65, thus expanding the study group to the age range of 18-65.

'The results of this year's study indicate that the trends observed in the past year have been maintained. The cashlessness of society is constantly growing. Currently, 60% of the respondents indicate cashless payments to be their preferred form of payment. The percentage of respondents preferring cash has remained at the similar level as last year, being 31% of the population. ‘The share of people undecided as to which form of payment is more convenient declined to 9%,’ says Dorota Osek, an economic psychologist from ARC Rynek i Opinia Research Institute, who conducted the survey commissioned by eService.

The results of the study show, among other things, the legitimacy and the outcome of initiatives supporting the development of cashless forms of payment, such as the cashless Poland Programme (Polska Bezgotówkowa). In the last 12 months as many as 82 percent of the respondents noticed an increase in the number of locations where you can pay by card or phone. The continuously growing availability of the terminal network means that the availability of cashless payments is increasingly perceived as a given. At the same time, the significance of availability of this form of payment for people who want to use it is increasing, especially for those who have encountered a situation in which they could not pay otherwise than in cash. 59% of the respondents complain that they encounter this problem at least once a month.

There is also one surprising conclusion from the results of the study, which is evidence of the strength of preference towards cashless payments. In the case of 78% of the respondents, when choosing a place of residence, an important factor would be the availability of card or mobile payments in nearby stores. This indication is as many as 9 percentage points higher than in the case of the factor of distance from the place of residence of friends and even the family (2 percentage points higher). This aspect is particularly important for people who came across the situation in which they wanted to but could not pay by card (82% of indications).

'The fact that the availability of places where you can pay by card is perceived as more important by people who came across the lack of such a possibility shows that today these things are as mainstream as Internet access, hot tap water or electricity in the socket. ‘Only when we cannot use them, do we realize how important they are,’ says Joanna Seklecka, CEO of eService.

Access to cashless payments in the place of residence is especially important for people from the Affluent segment (as much as 85% indications). On the second tip of the scales are respondents included in the Dreamers segment. However, even here the validity of cashless payment is indicated by 75% of the respondents. (Descriptions of segments characterizing the selected groups of respondents can be found in additional materials).

The reasons why we attach so much importance to the availability of terminals may be explained by the spontaneously indicated motives of paying by card or phone. One of the most important is convenience - indicated by nearly 65% of the respondents, i.e. over 2.5 times more than in the case of cash, for which, as in the previous year, 'failure to pay by card' (25%) is indicated in the first place among the reasons for its use.

Cash is also losing its positions where it used to be the most frequent form of payment. Over the course of a year, the share of cashless payments in transactions for small amounts increased to 19% (payments up to PLN 10), and even 28% (payments between PLN 10 and PLN 50). The percentage of people using both forms of payment in the case of small purchases has remained at a level similar to last year's.

The survey was commissioned by eService and conducted in August 2018 by the ARC Rynek i Opinia Research Institute. The CAWI (Computer Assisted Web Interview) technique was used on ARC Rynek i Opinia's proprietary Internet panel (www.epanel.pl), with approx. 55 thousand panellists. The study was conducted on a sample of 1,000 people aged 18-65. The structure for the study was prepared on the basis of IPSOS Polska data.